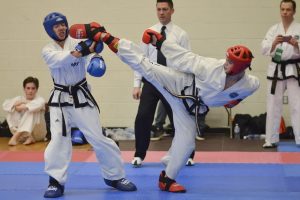 Cole Abou-Tibbett had a breakthrough year in 2014. He won the Nationals in Taekwondo and qualified for the World Championships which are held every two years. The World Championships this year were held in Italy. Of his experience in Italy, Cole said: “Although I didn’t win a medal, I did gain a lot of knowledge and more experience by competing internationally, and was honored to represent not only Canada but the Kaska people as well as every other First Nation out there. I promise to keep going strong in Taekwondo and be a World Champion in the next World competition.”

Cole is also proud of his Kaska Dena heritage and was raised on the land near his grandfather’s trap line near the Dease River in northern B.C. “It means a lot to be from the Kaska Dena First Nation,” he said. “I can stand up, put my culture out there and be a role model for other kids. I can also be a role model for younger people in the sport and can help out others, be a mentor.”