The Dease-Liard Sustainable Resource Management Plan (SRMP) addresses the management of land and resources in the Dease and Liard River drainages in northern British Columbia.

There are two phases of the SRMP. The first phase of the SRMP was approved in 2004. It focussed on timber, wildlife and biodiversity. The second phase was initiated in 2005. It adds chapters for minerals and aggregates; oil, gas and energy; access, and tourism and recreation. The direction from Phase 1 should be considered for all resource development. A final protected area is also being recommended, consistent with the Kaska Dena’s interests. With these additions, management direction is set for the full spectrum of resource values in the Dease-Liard area.

As in the first phase, this phase of the Dease-Liard SRMP has been developed to recognize the many unique and important environmental, social, cultural and economic values of the plan area and to manage these values in a sustainable manner. An important goal for the plan is to provide for a range of economic opportunities in the area while maintaining the integrity of natural resources.

The Kaska Dena were partners in the development of the plan and all decisions were made by consensus. Both the Tahltan Central Council and Teslin Tlingit Council were invited to participate in the planning process. The Tahltan chose not to participate, but provided input on the minerals and aggregates; oil, gas and energy; and tourism and recreation chapters.

The Dease-Liard plan area covers approximately 2.38 million hectares within the Dease-Liard Timber Supply Block of the Cassiar Timber Supply Area. It extends north-south from the Yukon Border to the Dease Lake/Upper Turnagain watershed and east-west from Tatisno Mountain/Tatisno Creek to the Little Rancheria watershed (Map 1). The majority of the plan area falls within the traditional territory in British Columbia of the Kaska Dena First Nations (Map 2: First Nations Traditional Territories). Their entire traditional territory is approximately 24 million hectares (93,000 square miles), or about the size of the entire state of Oregon. It spans one province (BC) and two territories (Yukon and Northwest Territories), and constitutes 25% of the Yukon Territory and 10% of the entire land area of British Columbia.

There is an overlap with the traditional territory of the Tahltan First Nations in the southwest and a small overlap with the territory of the Teslin Tlingit in the west. There are three communities within the plan area: Dease Lake, Good Hope Lake and Lower Post. The old town site of Cassiar is also located within the plan area. Watson Lake is 20 km north across the Yukon border.

The topography of the Dease-Liard is predominantly rolling terrain incised by major rivers into shallow valleys in plateau/plain areas and into steep-walled canyons in mountainous areas. The geography includes numerous features of glacial origin such as kettle lakes, drumlins and esker formations. Because the area is north of the Arctic divide, rivers drain northeast to the Liard River and into the Mackenzie River system before finally emptying into the Arctic Ocean. The climate is continental (relatively dry and cold), with low snow depths relative to more coastal areas.

See phase one of the SRMP for a more extensive description of the plan area. 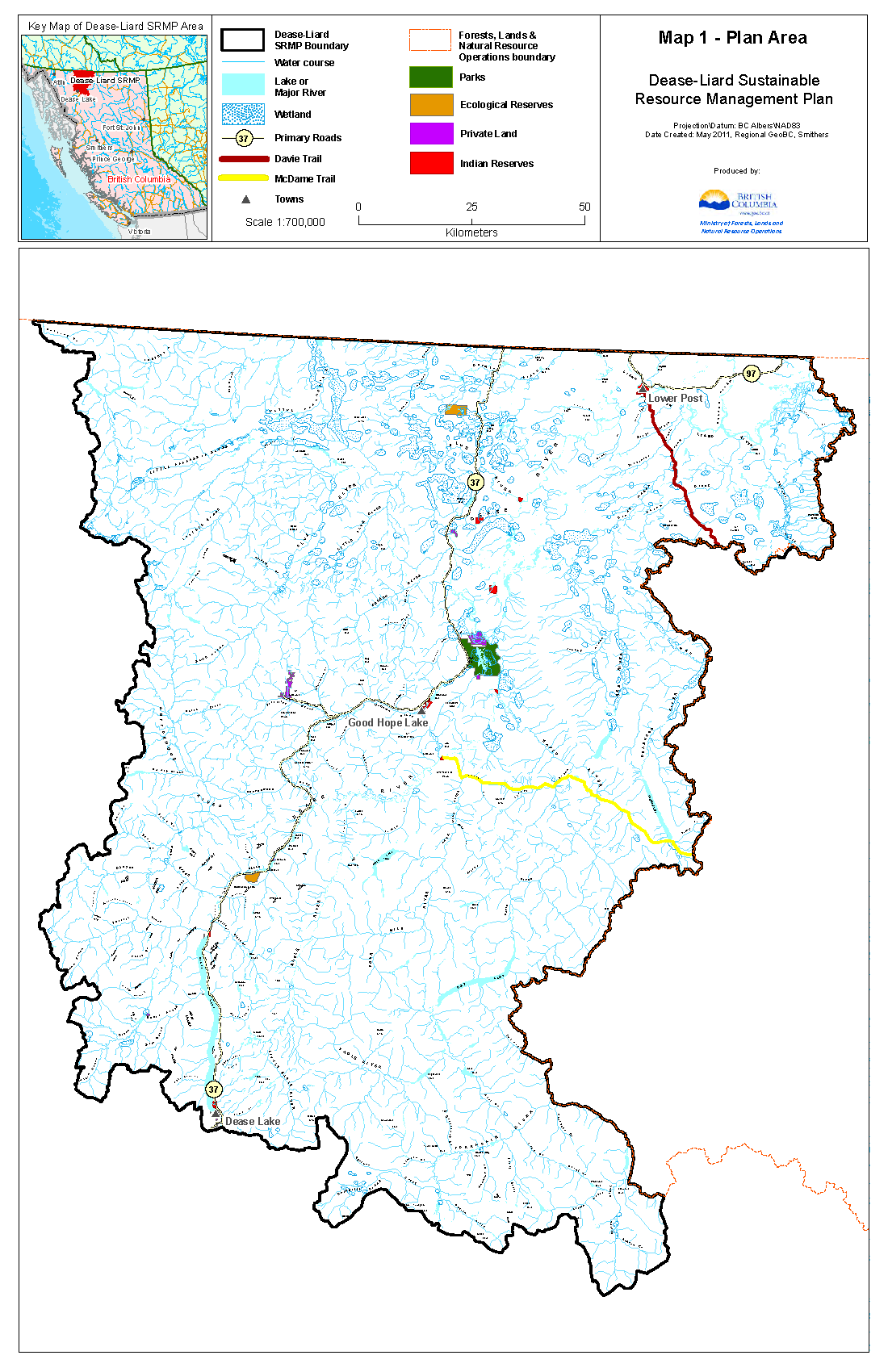 Linkage to SEA, SLUPA, and Treaty

The Kaska Dena in British Columbia are currently negotiating a Strategic Engagement Agreement (SEA) with the Province. A SEA can define the processes for consultation, shared decision making and resource revenue sharing in Kaska traditional territory. The Dease Liard SRMP is linked to a SEA through land use plan implementation and through the government-to-government Strategic Land Use Planning Agreement. That is, where management considerations in the SRMP indicate areas for shared decision making or resource revenue sharing, a SEA can provide the direction on how this would occur.

The Kaska Dena are currently engaged in treaty negotiations with the Province. Outcomes from this process may cause the Dease-Liard SRMP to be amended in order to reflect new arrangements regarding land and resource management in the traditional territory.

The vision and purpose of phase one of the Dease-Liard SRMP remain unchanged in phase two, with the addition of a goal for developing general and/or site specific objectives, measures and targets to guide mining operations.

This plan was developed with the principle of openness of information. During plan preparation and finalization, the former ILMB consulted with First Nations, stakeholders, and government agencies, and also held a public review of the plan (see Appendix D). The resulting plan reflects the concerns and/or interests expressed during the process. All information used to develop the plan is available upon request, with the exception of that which is legally recognized as confidential under the Freedom of Information and Protection of Privacy Act. Third-party information used during the planning process may only be released with the approval of the respective third party.

Scope of the Plan

The first phase of the Dease-Liard SRMP, approved in 2004, was developed primarily to direct the management of forestry activities. For this purpose, objectives were created to sustain a range of resource values in the plan area including wildlife, biodiversity, cultural heritage, visual quality, community use and timber.

The second phase of the SRMP addresses minerals and aggregates, oil, gas and energy, access, tourism and recreation, and protection.