The Kwadacha Nation Land Use Plan addresses the management of land and resources in the Obo River, Finlay River, Fox River, Warneford, and Kwadacha River (including others in the areas) drainages in northern British Columbia. The direction from the Land Use should be considered for all resource development. Management direction is set for the full spectrum of resource values in the Kwadacha Management Area. The Kwadacha Nation Land Use Plan has been developed to recognize the many unique and important environmental, social, cultural, and economic values of the plan area and to manage these values in a sustainable manner. An important goal for the plan is to provide for a range of economic opportunities in the area while maintaining the integrity of natural resources. The Kwadacha Nation Land Use plan is consistent with land use plans developed by other Kaska Dena communities.

The Kwadacha Nation plan area covers approximately 3.2 million hectares within the Kaska Dena Territory. It extends north-south from the confluence of the Kechika and Gataga Rivers to the confluence of the Akie River and McGraw Creek, and east-west from the Sikanni Chief Lake to the Headwaters of the Finlay River. The plan area falls within the traditional territory in British Columbia of the Kaska Dena Traditional Territory. The entire traditional territory is approximately 24 million hectares or about the size of the entire state of Oregon. It spans one province (British Columbia [BC]) and two territories (Yukon and Northwest Territories), and constitutes 25% of the Yukon Territory and 10% of the entire land area of British Columbia.

The topography of the Kwadacha Management Area is mountainous area with steep canyon walls and terrain incised by lakes and major rivers into shallow valleys in highland/plain areas. The geography includes numerous features of glacial origin such as kettle lakes, drumlins, and esker formations. The rivers drain southwest to the Finlay River of which flows into the Williston Lake Reservoir and into the Peace River then the Mackenzie River before finally emptying into the Arctic Ocean. The climate is continental (relatively dry and cold), with moderate snow depths. 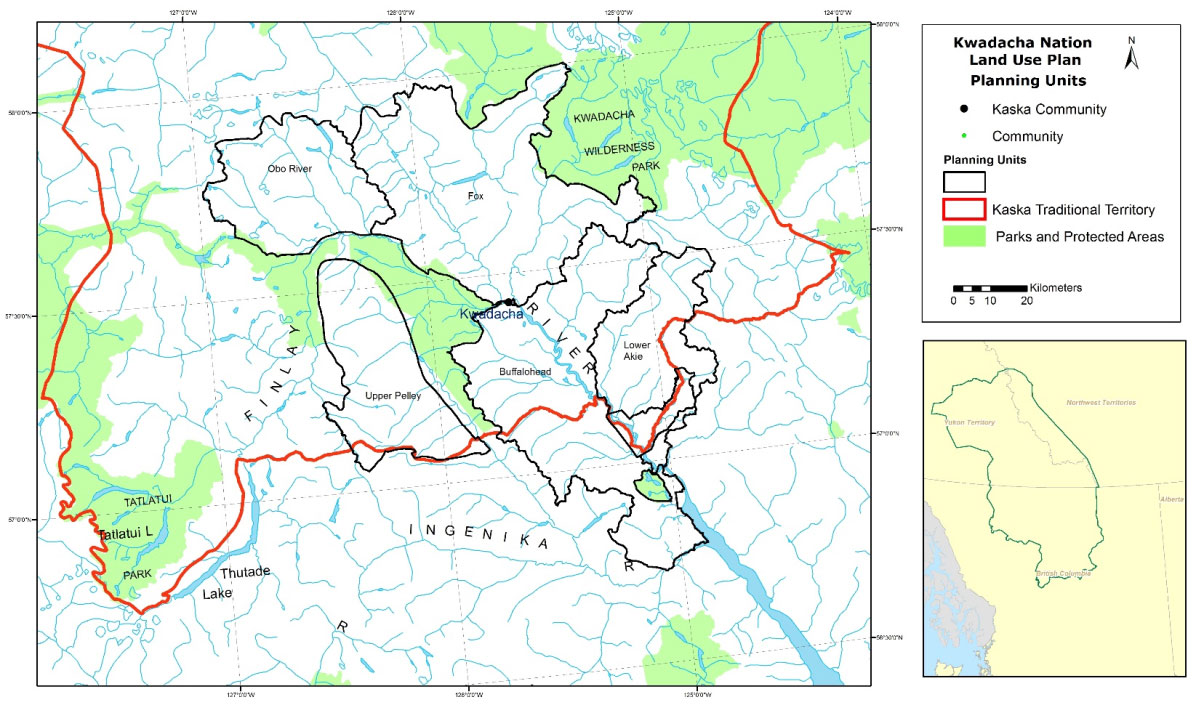 Through interviews with community members, participants all agreed with the following statement to represent the overall approach to land use planning in this area: We should use some of our traditional territory for its natural resources (such as timber harvesting, tourism, and mining) to better the economic conditions of our communities, as long as we protect some areas for our traditional uses.

Within the areas of the Fox and Obo we would like to see conservation and environmental protection, with some infrastructure such as cabins being built around the lakes, with existing cabins being protected. For mining purposes the community does not want any mining or exploration in the Fox and Obo areas. Mining exploration has already commenced in the Buffalohead and Lower Akie areas which have created benefit sharing and working relationships.

To aid in setting management direction, economic development interests were identified through community interviews for the entire plan area. The understanding is these interests are allowable to benefit the Kwadacha Nation community. It is not allowable to just have resources leave the traditional territory. Benefits can include employment, Kwadacha companies doing the work, economic benefit agreements, capacity building, and resource revenue sharing.

For a number of interests especially Mining, and Timber, the importance was having development that generates benefits but still maintains the environment and cultural values. Exploration companies have been visiting the community and providing good information which the community members feel is essential to a good relationship. There were concerns on logging and the potential impacts that may occur. The need for direct community engagement on the more detailed planning for this activity was also identified.

Some specific interests identified include a community greenhouse, berry picking, hunting, trapping, guided fishing, and backcountry tourism which would include summer and winter activities.