Prime Minister Justin Trudeau laid out his plan to reset Canada’s relationship with its indigenous people during his address to a group of First Nations leaders in Gatineau, Que.

“It is time for a renewed, nation-to-nation relationship with First Nations peoples, one that understands that the constitutionally guaranteed rights of First Nations in Canada are not an inconvenience but rather a sacred obligation,” said Trudeau to loud applause from First Nations chiefs this morning.

Hundreds of chiefs and other First Nations delegates are meeting at an annual three-day gathering organized by the Assembly of First Nations.

The prime minister said his government would immediately move to act on several of the promises his party made during the election campaign, including a process to launch a national public inquiry into missing and murdered indigenous women which he said was “already underway.”

“We have made this inquiry a priority for our government because those touched by this national tragedy have waited long enough,” said Trudeau. “The victims deserve justice, their families an opportunity to be heard and to heal.”

The ministers said they would start by meeting families of missing and murdered women this week.

Trudeau also said his government would make significant investments in education and lift the two per cent cap on funding for First Nations programs, beginning with the first budget of 2016.

“As you know, that limit has been in place for nearly 20 years,” Trudeau said. “It hasn’t kept up with the demographic realities of your communities, nor the actual costs of program delivery.

“It’s time for a new fiscal relationship with First Nations that gives your communities sufficient, predictable and sustained funding.”

The prime minister said his government would immediately move on the following five promises the Liberals made during the recent election campaign:

“These are just five of the commitments we’ve made as part of our efforts to repair this most important relationship,” Trudeau said in the address to First Nations leaders on Tuesday.

Trudeau said his government would also look to repeal bills passed “unilaterally” by the Conservatives under Stephen Harper.

“We will conduct a full review of the legislation unilaterally imposed on indigenous peoples by the previous government,” said the prime minister in his speech to First Nations chiefs.

“Where measures are found to be in conflict with your rights, where they are inconsistent with the principles of good governance, or where they simply make no public policy sense, we will rescind them,” said Trudeau. 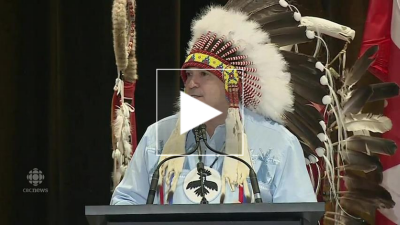 AFN National Chief Perry Bellegarde said the steps taken by Trudeau at home and abroad in his first few weeks as prime minister gave him cause for “optimism.

Bellegarde, who was part of Canada’s official delegation at the UN climate change conference in Paris, said he thought Trudeau understood the role of indigenous people in protecting the environment.

‘Our people have waited in terrible conditions, suffering indignity and going without many of the basic services other Canadians take for granted.’ – Perry Bellegarde, National Chief for the Assembly of First Nations

The national chief has been calling on the Canadian government to close the gap in the quality of life between indigenous and non-indigenous Canadians.

“Nothing will have a more immediate impact in helping to close the gap than lifting that two per cent cap and launching discussions on significant catch-up funding after decades of underfunding.”

Bellegarde urged Trudeau’s Liberals not to rest on their election laurels, but to “move quickly” to close that gap.

“The First Peoples of Canada have suffered too much, and for too long. Our people have waited in terrible conditions, suffering indignity and going without many of the basic services other Canadians take for granted,” the national chief said.

The prime minister also vowed to implement all 94 of the recommendations from the Truth and Reconciliation report, starting with the UN declaration on the rights of Indigenous Peoples.

Trudeau will meet with the AFN and four other national aboriginal organizations when the Truth and Reconciliation Commission presents its final report into the history and legacy of Canada’s residential school system on Dec. 15 in Ottawa.

The other four organizations are: