Gathering Around the Fire [Documentary] – DVD

Healing and Reconciliation
Gathering Around the Fire Documentary Film 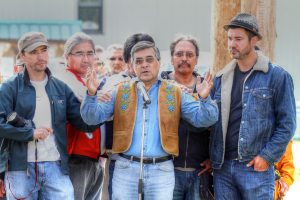 From August 10–13, 2012, the Kaska Dena, Tahltan, and Taku River Tlingit Nations came together to stand strong in support of one another and create the healing space required to hold Gathering Around the Fire, one of the most significant healing gatherings of our time. Hosted by the community of Daylu, over 800 people joined together for four days to commemorate former students of the Lower Post Residential School. The focus of the Gathering was on healing, culture, traditions, and cleansing of the land.

Leading up to and during the Gathering, co-cinematographers Brian Ladue and Victor Kisoun travelled to Kaska, Tahltan, and Taku River Tlingit communities to record and film former students in their communities. With additional support from filmmaker, Al Code, the actual Gathering Around the Fire at Daylu was filmed and the documentary was edited and produced.

Just under 60 minutes in length, the documentary film entitled “Gathering Around the Fire” is described:

“At Lower Post, BC, a place always known as Daylu, the site of a notorious residential school is cleansed; as those involved recall and confront traumatic memory through ceremony and testimony. ‘Gathering Around the Fire’ is about courage and determination to heal relationships between people, community and government at the most fundamental level.”

This documentary was funded through the Truth and Reconciliation Commission (TRC) and Aboriginal Affairs and Northern Development Canada (AANDC). If you are interested in viewing this documentary, please contact Lacey Johnny at the KDC office.