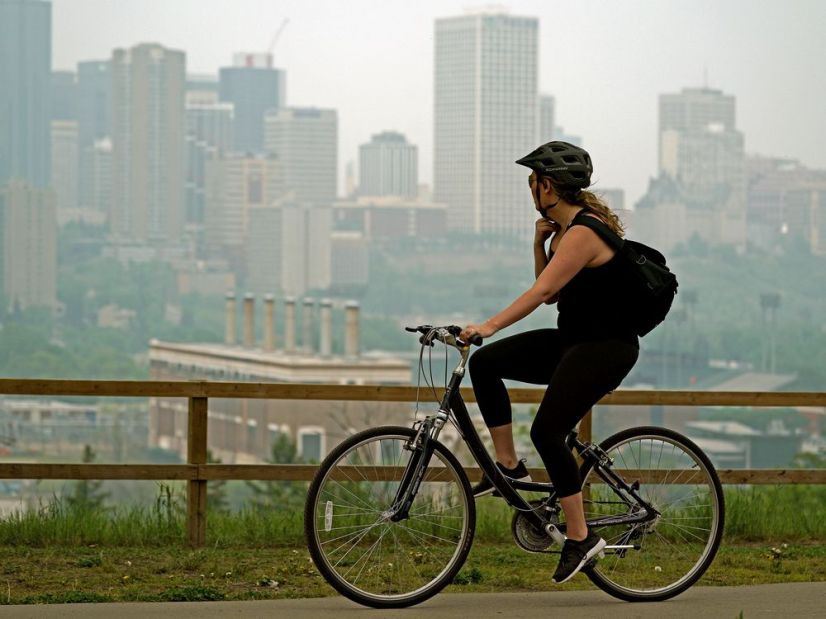 A cyclist gets a view of the smoky downtown Edmonton city skyline on Friday, May 31, 2019. Larry Wong / Postmedia Network

It is barely August, and already this summer is marked by record-breaking disasters. Forests are burning, producing unhealthy air in areas hundreds of kilometres away. Polar ice is melting, flooding coastal areas that have been safe for decades. Violent thunderstorms are terrorizing the Midwest, flooding farms and washing away soils. Greenhouse gas emissions continue to increase, even while politicians attack such basic control measures as a simple tax on carbon pollution that economists across the political spectrum support. Most of us feel increasingly powerless, and fear for the future of our children and grandchildren.

Scientists also warn about impending wildlife extinctions, comparable to those following the asteroid strike that wiped out dinosaurs 66 million years ago. But as a recent letter signed by ourselves and 30 other prominent scientists underscores, this crisis has a much simpler and cheaper solution than climate change. Virtually all the world’s governments have signed the 1992 Convention on Biological Diversity (CBD). It is the best, most cost-effective way to slow the decline of wildlife and secure the same life-support systems we humans depend on.

Under the biodiversity treaty, countries are committed to protecting at least 17 per cent of lands and 10 per cent of oceans by the year 2020, but Canada lags far behind other advanced nations. Embarrassingly, we rank last out of the G7 in meeting this target. Thankfully, by preserving our pristine boreal and coastal forests, tundra and mountain ranges we can catch up and even become global leaders.

It helps that our political leaders agree on this goal. The Conservative Party adopted the current targets and the Liberals have provided an unprecedented $1 billion “Nature Fund” to help us get there. However, political consensus at the federal level isn’t enough to get the job done. There are additional challenges.

The leading challenge is meeting the 2020 target while honouring Indigenous rights. Most of Canada’s wild lands and waters are the traditional homelands of First Nations, Inuit and Metis peoples. In many cases, legal title to land remains in doubt, since proper treaties and settlements with Indigenous peoples remain incomplete or non-existent. Relationships and reconciliation with Indigenous governments are a necessary part of creating new protected areas.

This may be easier than it seems. Indigenous-led conservation efforts, including co-managed national parks and newly recognized Indigenous Protected and Conserved Areas (IPCAs), are replacing old-fashioned colonial approaches. Dozens of Indigenous communities and nations have proposed creating new IPCAs, covering more than two-thirds of the lands needed. Many Indigenous Guardians programs have stepped forward to manage their traditional lands to protect the environment.

Furthermore, protected areas must be large and resilient enough to survive rapid climate change. We need to support large protected areas like the one surrounding Great Bear Lake that is 10 times the size of Banff National Park or the one linking several existing protected areas in northern British Columbia’s Kaska Dena region.

At the same time, Canada’s government must resist efforts to count incomplete or inadequate conservation proposals that won’t effectively or permanently protect wildlife or their habitats, such as buffer strips left between clear cuts. Under the rubric of “other effective conservation measures,” an open-ended phrase intended by international negotiators to address very specific situations, some parties may push Canada to water down our compliance efforts.

Canada should also resist pushback from provinces or territories unwilling to support proposed protection of areas with both high biodiversity and economic values. All Canadian governments — federal, provincial, and municipal — are in this fight together. Most of Canada’s productive land has already been committed to industry or agriculture. We can’t afford to continue that bias if we hope to preserve wildlife and sustain clean air and water.

Many in the scientific community are watching Canada’s progress toward the CBD’s 2020 goal and beyond as the international agreement evolves. For a tiny part of Canada’s annual expenditures and limited resource development trade-offs, we can take our rightful place as an international leader in ameliorating the extinction crisis. On an otherwise bleak political horizon, this opportunity offers a badly needed ray of summer sunshine.