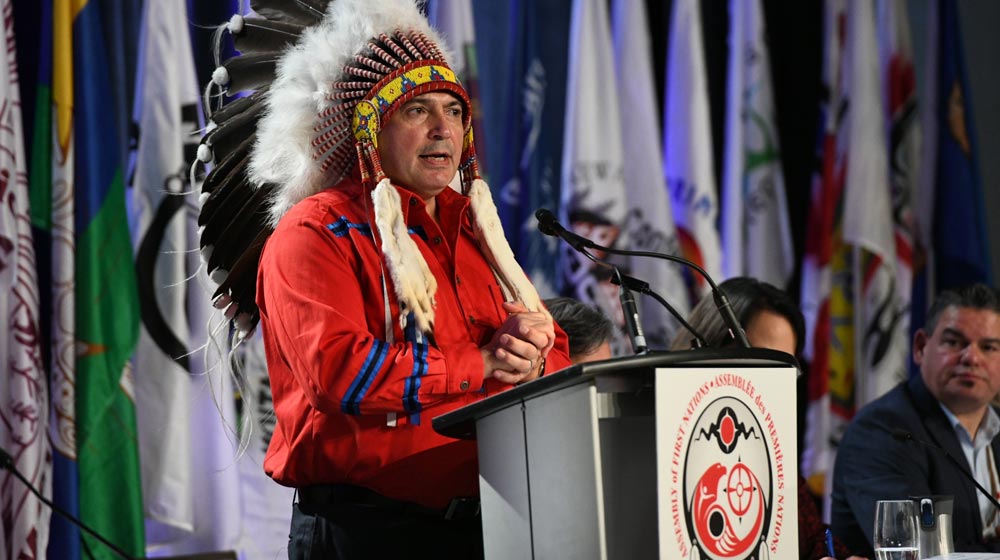 Perry Bellegarde seems to have no doubt that the Justin Trudeau government wants to deliver on its promise to make profound changes in its relationship with First Nations.

The national chief opened the three-day Assembly of First Nations’ (AFN) December chiefs’ confederacy Tuesday morning with an address to the 1,200 registered delegates, including more than 200 chiefs.

During a press conference after his speech, the incumbent confirmed he would be seeking re-election.

In the final chiefs assembly before the next election for national chief this coming July, Bellegarde updated the chiefs on the work that’s been done in his term so far and described the work that is still to be done.

He said progress has been made as the AFN and the federal government work to create a new fiscal relationship, but added, “some things are taking too long to change.”

As he listed the various issues the AFN and the federal government have been working on as the result of an agreement signed in July 2016, the national chief said this was “a pivotal moment” and a “tremendous opportunity” to make real progress with a federal government that says it’s ready to confront First Nation issues.

Bellegarde reported that the AFN was working on a number of key issues: housing, water quality, education, child and family services, pollution clean-up and language preservation.

He acknowledged that the Trudeau Liberals has committed $11.8 billion to First Nations in the last two federal budgets.

“But we won’t be totally happy with that until the money flows more efficiently out to your First Nations where your people will feel it,” he told the chiefs.

A key focus of the work with government is getting the United Nations Declaration on the Rights of Indigenous Peoples implemented and framed in Canadian law.

He took note of the activities on the government side, saying that Crown-Indigenous Relations Minister Carolyn Bennett was conducting a policy review for specific claims, comprehensive claims, additions to reserves and the inherent right to self-government policies.

And with the recent creation of an Indigenous Services Department, headed by Minister Jane Philpott, additional work is possible, he added.

“The program hasn’t been updated since 1992. And the budget hasn’t changed since 2009,” the national chief said.

Generally, Bellegarde said he is pushing the government for “long term, sustainable and predictable” funding for all program areas.

The AFN is seeking to have government commitments written into legislation that can’t be changed or cancelled at a bureaucrat’s whim.

Bellegarde has asked the prime minister to call a first ministers meeting on Indigenous issues for 2018.

He made the argument to the chiefs.

“Because let me be very clear – participating in a side-meeting that is separate from the main event is just not good enough. In fact, it has to change and we will push for that change,” he said.

Bellegarde also wants the AFN to be involved in another set of high profile negotiations.

There was another important first this year, and that was the invitation to provide input to Minister of Foreign Affairs Chrystia Freeland, regarding the North American Free Trade Agreement – an agreement where we were not involved the first time.

“Not back in 1994. We weren’t there,” he said. “We need to be involved in international trade deals to protect our territories, to protect our rights, and to secure economic opportunities for our people.”

“It sets an important precedent for First Nations on international trade.”

He believes all government policies should include an Indigenous chapter.

“All the countries of the world have now endorsed the UN Declaration.

Having Indigenous Peoples Chapters in all those agreements to give effect to the Declaration only makes sense,” he explained.

Well into his speech, Bellegarde raised an issue that has many First Nations people wondering about the sincerity of the Liberal government’s various promises on First Nations issues.

“Some things are taking too long to change. I’m talking about our children stuck in the child welfare system, waiting for services they have been guaranteed under Jordan’s Principle,” he said.

“Waiting, when we know there is discrimination in the system and few resources for our children, compared to children in provincial care. This is unacceptable and it is wrong.

The national chief raised a point that has long been held by First Nation leaders: Even when the politicians are persuaded to act, action doesn’t always follow.

“This year we have had an unprecedented number of interactions with ministers. They get it. We need the bureaucracy to keep up with the pace of change.

“Our Chiefs Committees and our technical teams have been working hard with the officials on the government side. You see, there has been progress. I will continue to stand up for our rights.”

Crown-Indigenous Affairs Minister Carolyn Bennett sounded more like a First Nation leader than a minister of the crown when she addressed the chiefs-in-assembly Tuesday morning.

She spoke of the “straight jacket of the Indian Act” and said Indigenous self-determination “should never have been taken away.”

Bennett acknowledged the long history in Canada of “racist policies” directed at First Nations’ people and vowed to bring in transformative reforms.

“We are at a pivotal moment in our country where there is political will,” she said.

Saying that her government was finally implementing a recommendation made by the Royal Commission on Aboriginal People in 1996 to create a ministry that dealt only with services to Aboriginal people, Bennett repeated her claim that it was not a splitting of the Indigenous Affairs department but a “redoubling” of the government’s efforts to deal with First Nation matters.

She told the chiefs that the oft complained about First Nation and Inuit Health Branch had been transferred from Health Canada to Minister Jane Philpott’s new Indigenous Services Department.

Bennett worked hard to assure the chiefs that she gets their point of view.

“We have to deal with the imperative of forging a new relationship,” she said. “Sadly, the settlers thought that they and their ways were superior.”

She listed a number of things that were lost as a result of that approach.

Bennett, a physician, said the medical wheel approach of maintaining good physical and spiritual health was preferable to the “repair shop” medical model of Europeans. She said “true leadership of asking not telling” was something the newcomers could have learned from Indigenous peoples.

She assured the chiefs that she shared their desire to end the talk and start the action.

“I know all of you are impatient. I want to tell you that our government is impatient too,” she said.

Bennett served as the Indian Affairs critic during the Harper years.

She made a lot of statements as the critic that AFN observers remember. She appeared to be aware of that and talked of bringing a “recognition-based approach” to Aboriginal rights issues.

“First Nations go through an arduous process to prove their rights exist. We have completed 47 comprehensive claim and self-government agreements in half a century,” the minister said. “That is not a pace we’re comfortable with.”

The minister will have to deal with a great deal of suspicion if she is to convince the chiefs that she will be able to keep her promises.

When she said, referring to a hope that self-government will eliminate the need for a department to look after the needs of First Nations that “we look forward to the day when this brand new Department of Indigenous Services will no longer exist,” one long-time AFN observer reminded APTN that a minister once said he intended to be the last Indian Affairs minister and he would be the one to “turn out the lights” when they shut the place down forever. That minister was Ron Irwin, who was appointed in the early 1990s and the ministry is still there and bigger than ever.

Jody Wilson-Raybould is a former member of the AFN executive committee, a former British Columbia regional chief. But now as the federal justice minister, when she talks about “confronting and ending the legacy of colonialism,” it’s time to sit up and pay close attention.

“Self-government and colonialism are antithetical,” she told the chiefs when she spoke after Bellegarde and Bennett. “We need something wholly new. There must be a sharp break with the past.”

Veteran AFN watchers have heard such promises from ministers in the past. The “transformative change” of the Paul Martin era came and went without much in the way of any change at all. Those veterans will remember then Six Nations chief Dave General shaking a jar full of pennies at then Indian Affairs minister Andy Mitchell and telling him the jar held his “transformative change.”

When the late Andy Scott was the Indian Affairs minister, he held a press conference to announce that termination of rights was no longer government policy. But again, not much changed.

But both federal ministers who addressed the chiefs on Day 1 of the assembly worked hard to convince the chiefs that this time it’s for real. Both ministers said their government is about recognition of rights.

“First Nations have the right to autonomy in their internal affairs,” the justice minister said. “And they have a right to the ways and means.”

Wilson-Raybould committed herself and her government to serious reform, embracing the United Nations Declaration on the Rights of Indigenous Peoples (UNDRIP). While the previous government dismissed UNDRIP as a mere aspirational document, the Trudeau government appears to be working towards making it a part of the everyday function of government.

Wilson Raybould told the chiefs of her support for Bill C-262, the United Nations Declaration on the Rights of Indigenous Peoples Act, a private member’s bill put forward by NDP MP Romeo Leblanc and former Liberal MP Tina Keeper, that is making its way through the legislative process now.

She said it would help “remove the structures of colonialism” and help with “reconstituting [Indigenous] nations.”

Reconstituting nations is something the justice minister spent a significant amount of time on during her speech.

“The Indian Act cannot survive the implementation of UNDRIP,” she said, before telling the chiefs that they will have a big role to play in a post-Indian Act era.

“The imposition of band councils must be addressed. The quality of government is important,” she said.

Wilson-Raybould challenged the chiefs to think about how self-determination would look, asking a series of questions.

She wanted them to think about how they will organize their governments, what mechanisms will provide effective governance while being true to traditional governance, how will they be able to ensure these governments have legitimacy, what capacities will be required.

“We must accomplish this together and we must move now,” she added.