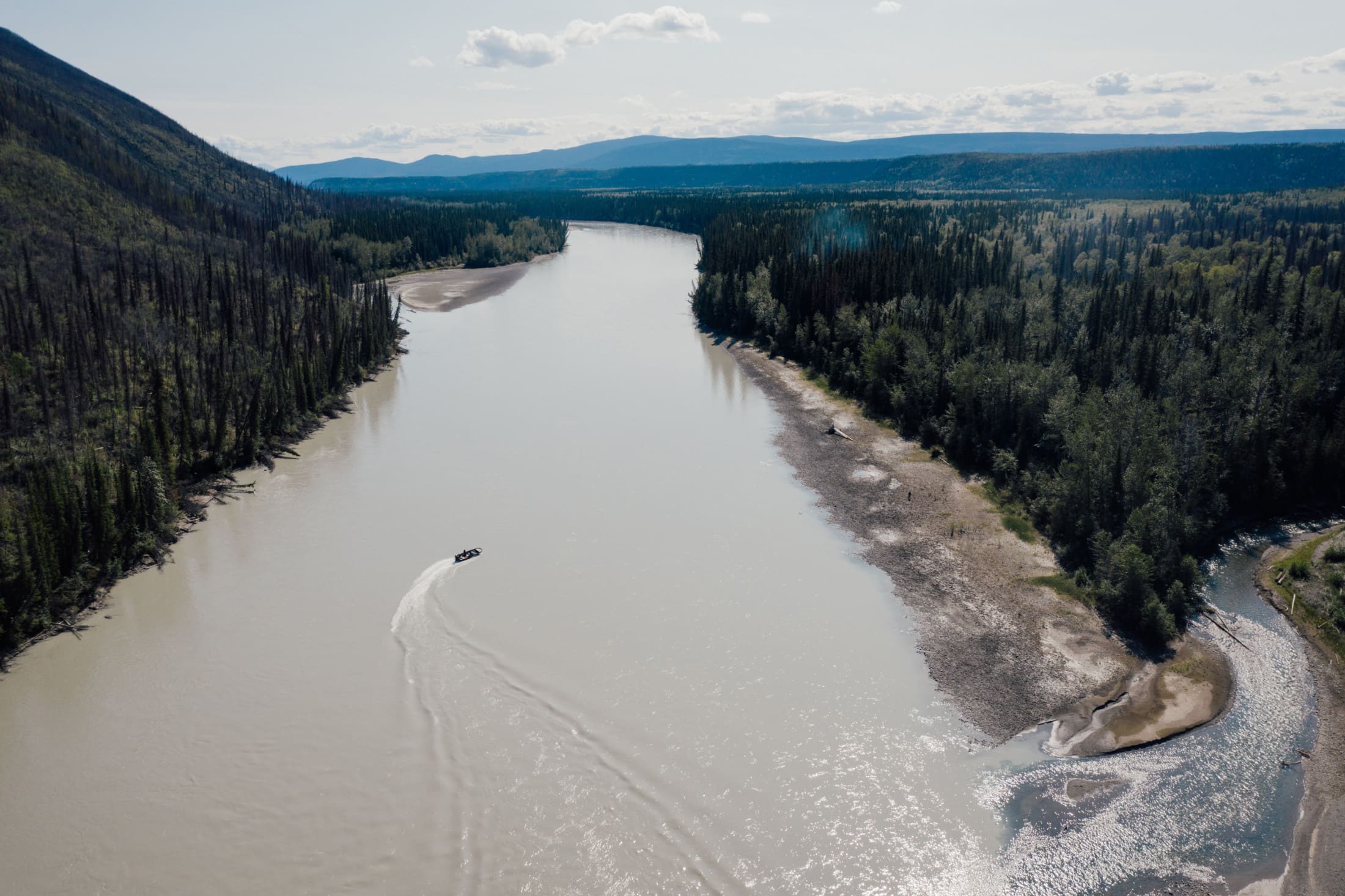 The Narwhal | On The Ground

In a wild, roadless area in remote northern British Columbia, First Nations land guardians keep tabs on their traditional territory, including in an area proposed for a new Kaska Indigenous Protected and Conserved Area 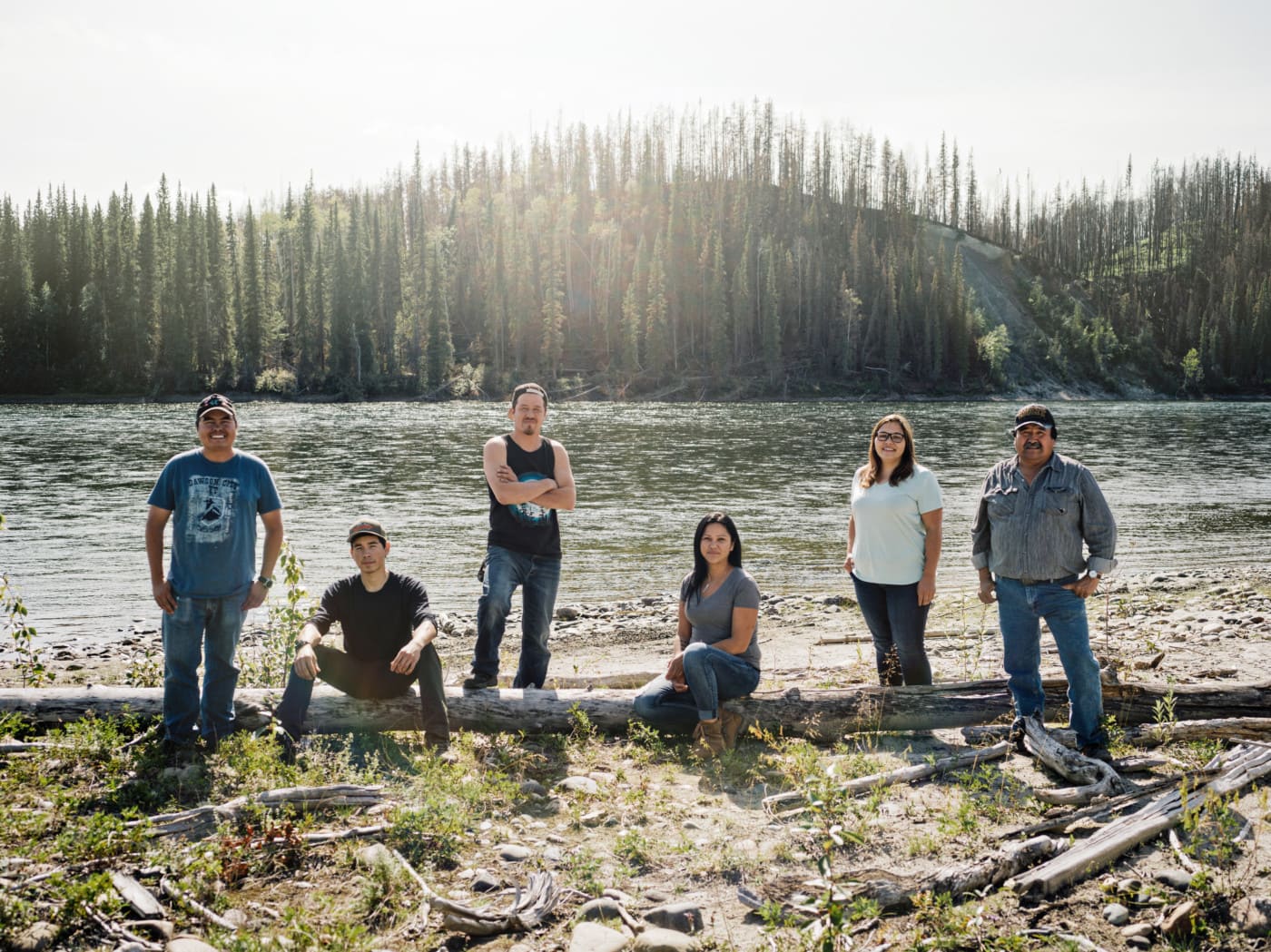 Six of the eight Kaska land guardians pose by the Liard River. The aftermath of a 2018 forest fire is visible in the background. Photo: Taylor Roades / The Narwhal

Zigzagging through the Kechika River rapids in his motor boat, Robbie Porter spots a twist of smoke rising from the boreal forest of spruce and pine. Hands on the steering wheel, rifle in the stern, the Kaska Dena First Nations guide rises from his seat for a better look.

“Maybe a lightning strike,” he says over the din of the jet engine. “Or maybe a camp.”

Porter, an Indigenous land guardian, knows the unbroken wild country around the Kechika River in northern B.C. as well as anyone.

Born in the nearby community of Lower Post, the youngest of nine, he spent his early childhood walking ancestral trails and family traplines along the Kechika River, eating smoked beaver and dried moose meat on family treks so long even the dogs carried packs.

“It was quite the challenge,” Porter, a soft-spoken hunter, remembers.

He watches the smoke as it reaches for the blue sky one moment and bends sideways the next, stretching over a wilderness so vast you could walk for weeks and not cross a road.

On a clear, windless day in August, Porter is zipping upstream on the Kechika River with anthropologist Gillian Staveley, a Kaska Dena member, and Tanya Ball, head of the Kaska land guardians program.

The guardians are the Kaska’s eyes and ears on the ground, keeping an eye on land use in the ancestral territory of the Kaska Dena people and using traditional knowledge and science to monitor everything from wildlife health to water quality.

The plan for the day is to show me and photographer Taylor Roades the Kechika River, a key feature in the vast intact region proposed for a Kaska Indigenous Protected and Conserved Area.

But now the land guardians have to make an unexpected stop.

Porter pulls up his 18-foot aluminum boat on a rocky shore in front of the smoke. It’s just upstream from the banks of the Red River where his family used to arrive, laden with beaver pelts, in two 30-foot rafts his father had lashed together from freshly cut spruce.

From the rivers’ confluence, the family would follow an ancestral trail back to Lower Post, a traditional riverside meeting place that is home to the Daylu Dena Council, representing one of B.C.’s three Kaska Dena communities.

Only steps away from the boat, hidden by a fringe of trees, is a half-burned hunting camp. 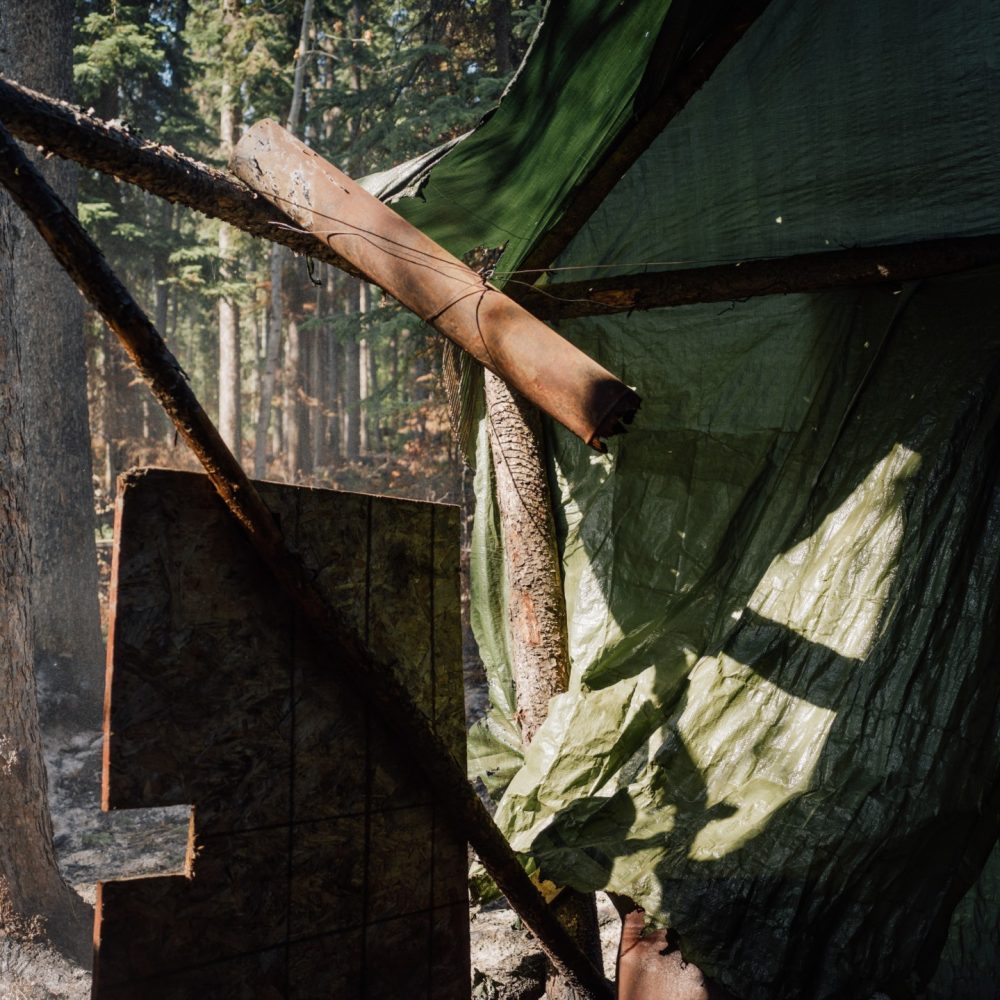 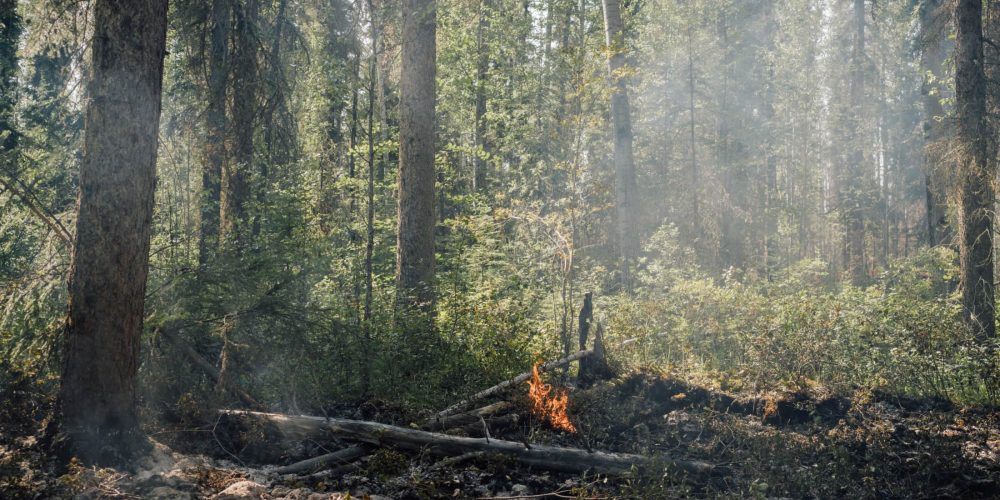 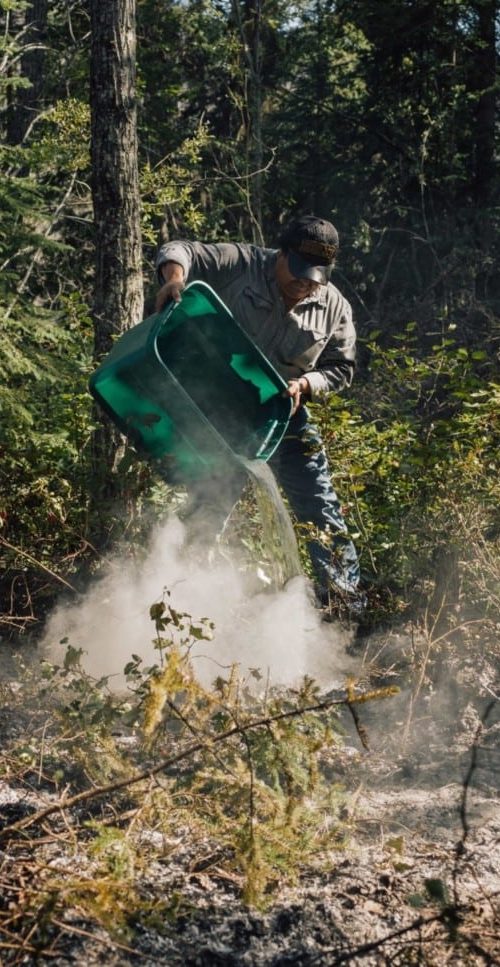 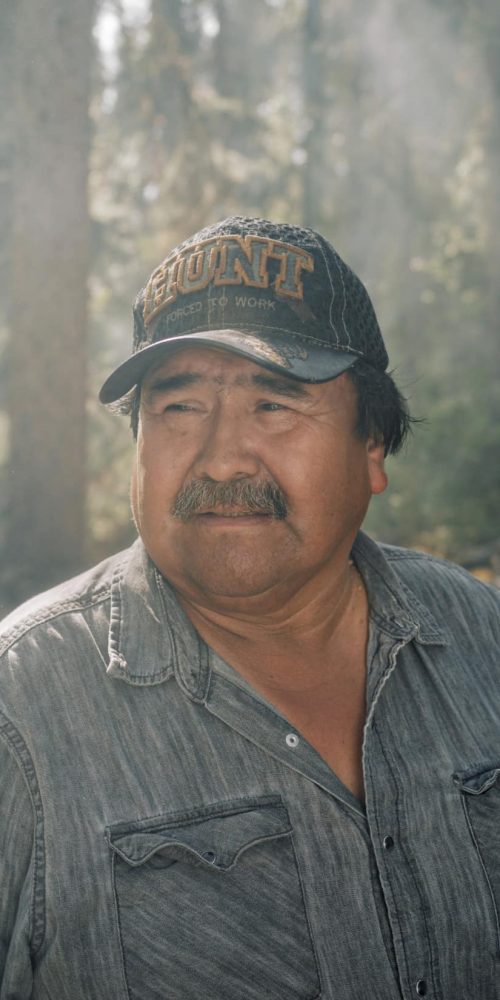 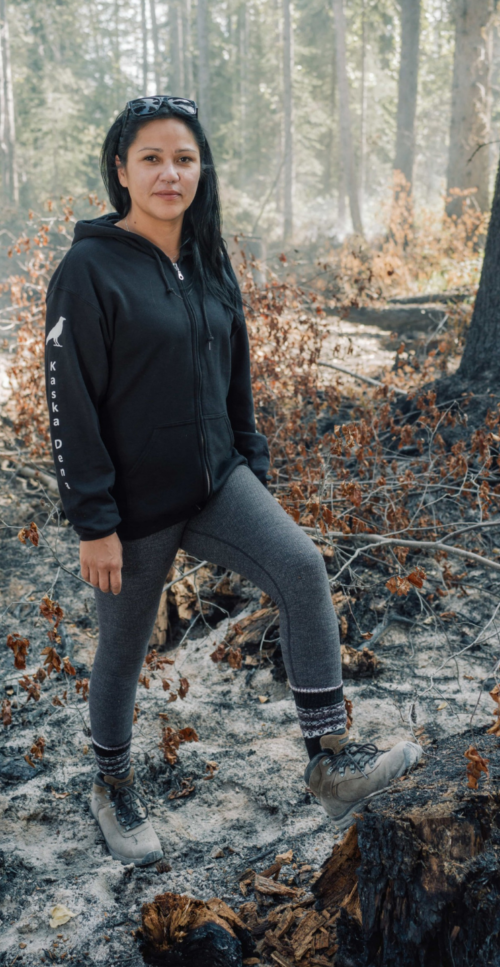 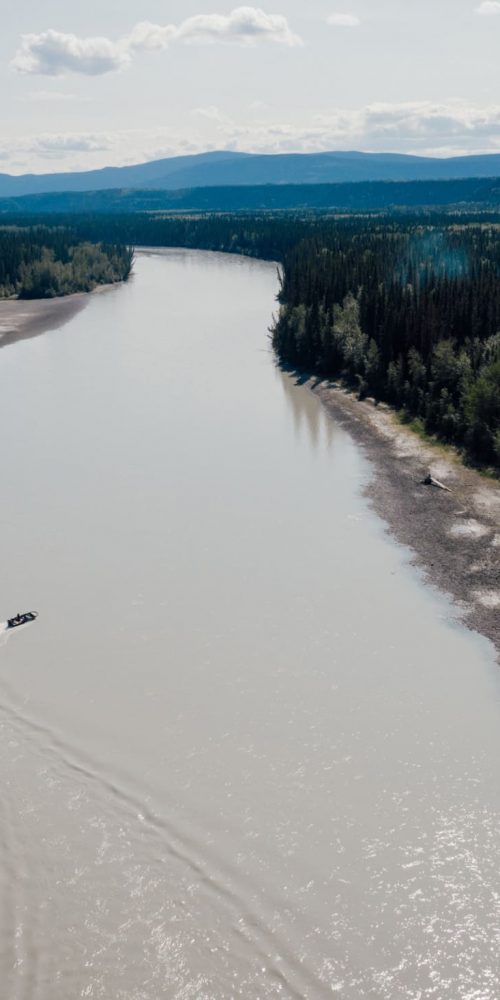 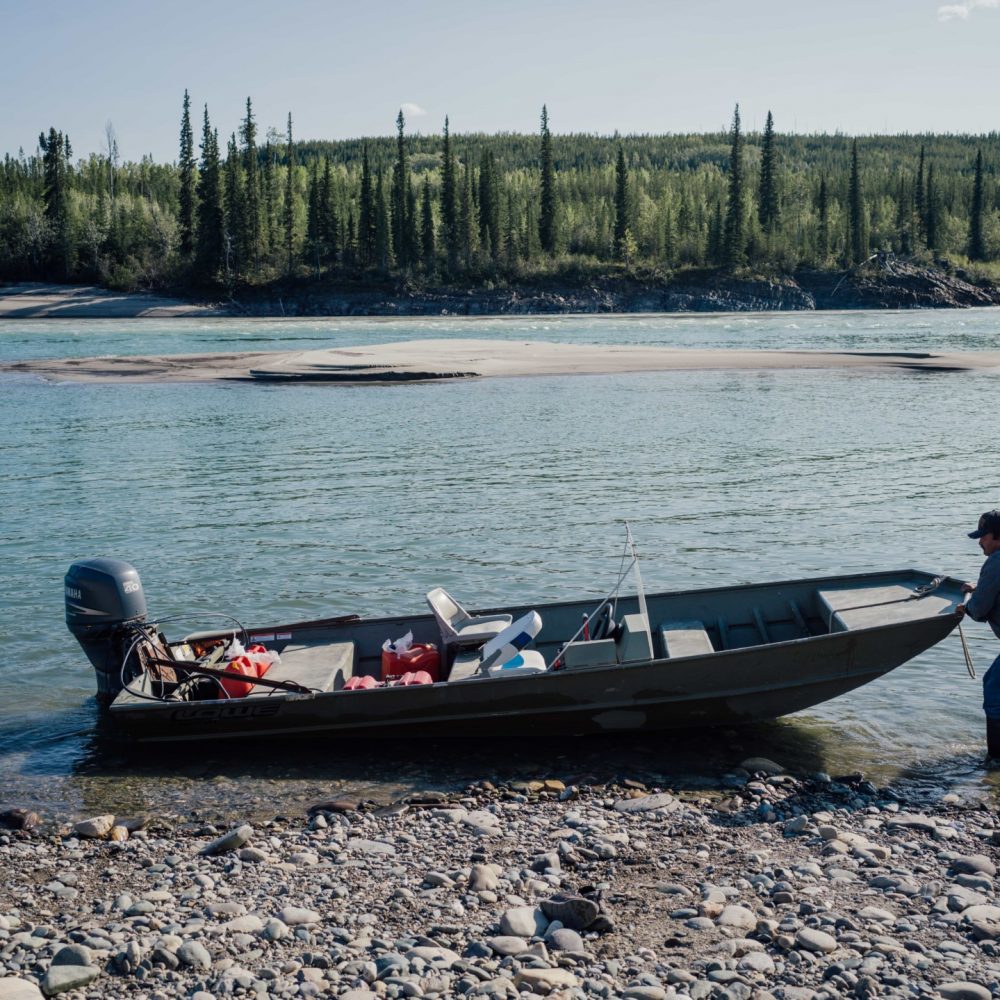 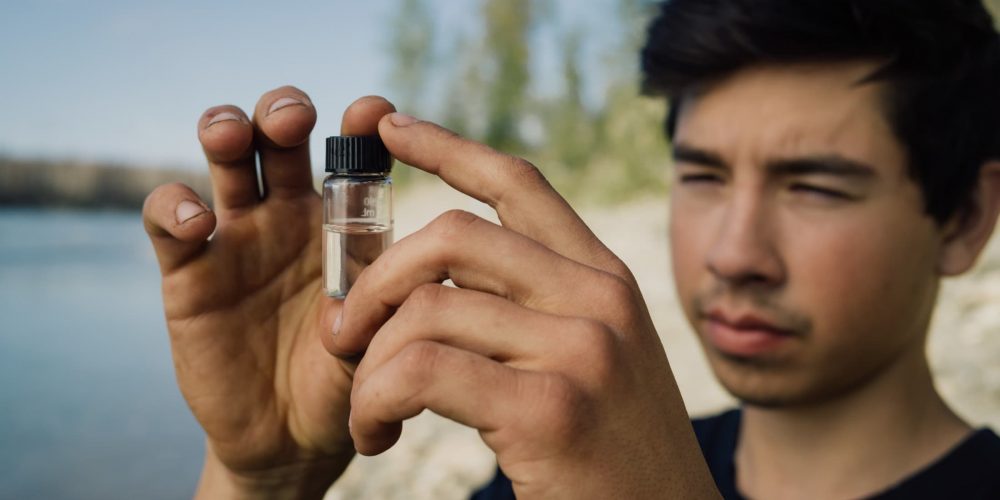 “Holy shit,” says Ball, as she and Porter pick their way through a 150 by 50 metre area of slippery, steaming ash.

Porter leaps into the air when the fire, simmering underground through squirrel tunnels, sears the soles of his black shoes.

A rusty wood stove lies on its side, next to a singed ladle and rusty tin cans. Melted tarps hang from a simple A‑frame shelter made from cut trees. A blue plastic mug still dangles from a nail on one of the poles.

Pockets of flames pop up here and there. Spruce trees stand tall and surprisingly green above their scorched trucks, ready to topple in a wind without most of their roots. The warm air mists with grit and ash.

Ball taps a cell phone app, used by the land guardians to monitor land use and flag environmental concerns, to mark the fire’s GPS coordinates. She takes photographs to send to BC Wildfire Services.

“It’s been smouldering for a while and all of these trees are danger trees now,” observes Ball, who grew up in Lower Post and went to college in Terrace, where she studied environmental science before working as a GIS technician.

Porter, wearing jeans and a baseball cap that says “Born to Hunt,” empties a plastic tote of boat gear. He fills it with river water, carrying it up the bank again and again to douse the flames.

“It might have started last fall and it might have burned underground,” he says, wiping sweat and ash from his face. “There’s not much fuel, dry stuff, around. It’s a little wet there. It shouldn’t go too far … I just wonder if it’s from the previous fire or from this tent.”

The Kaska land guardians program would have a greatly expanded role in a proposed new Indigenous protected area. Currently, eight Kaska guardians are spread out among the three B.C. Kaska communities. Photo: Taylor Roades / The Narwhal

Porter, who works seasonally for a Yukon guide outfitter, has been running boats and imparting traditional knowledge to Kaska land guardians since the program launched in 2015 in response to concerns about the impacts of accelerated hunting in Kaska ancestral lands.

The Kechika River, whose lower reaches are home to two woodland caribou herds and Stone’s sheep, was an area of particular concern.

In the Kaska language, the Kechika is Tahdazeh’, meaning “long inclining river.” Its milky grey-green waters are a stark contrast to the Liard River, turquoise and crystalline, into which it flows an hour downstream by boat, not far from the Yukon border.

Close to the rivers’ confluence is Skooks Landing on the Liard River, which provides access for hunters, especially during the frenzied annual 10-day elk hunting season in September. Ball says cabins owned by First Nations members were getting broken into and moose and other species were being illegally targeted.

“There was a lot of poaching,” Ball says. “We’d find a moose shot and the antlers taken off … Sometimes they’d be left on [and the moose] not even gutted, just shot and left.”

In 2010, the Kaska Dena Council put up and locked gates on the Skooks Landing access road to restrict entry temporarily.

Today, the land guardians — eight in total, spread out among three Kaska communities in B.C. — patrol highways and access roads to their traditional territory. Trained in conflict management, they approach hunters to see if they will participate in a land use survey, asking questions such as the GPS location of their camp, how many people are in their party and what tags they have purchased. Hunters are also asked to call the guardian program if they plan to leave meat behind, so the guardians can come and pick it up.

“A lot of people think First Nations are there to kick them out of the land or don’t want them there,” Ball says. “I just want them to see that we’re just there to help monitor land use and make sure things are taken care of.”

The guardians also broker relationships with guide outfitters, who would be grandfathered into the new Kaska protected area along with other current users such as commercial trapping. One outfitter donated moose, caribou and mountain goat meat to Lower Post last year, feeding 27 homes, Ball says.

In August 2018, as the Blue River and Lutz Creek wildfires threatened the Liard and Dease Lake valleys, the three B.C. Kaska chiefs — along with Danny Case, chair of the Kaska Dena Council, representing B.C.’s three Kaska nations — wrote a letter to Doug Donaldson, B.C.’s Minister of Forests, Lands and Natural Resource Operations. The letter served notice of temporary hunting closures in some of Kaska territory, including around the Kechika River.

The closures would be in effect, the chiefs told Donaldson, until they could assess the situation and make informed decisions on the impact of wildfires on wildlife, which had fled their normal ranges to escape the flames.

Community members had been pulled away from their regular duties to deal with wildfire impacts and responses, the letter noted. Lower Post, the home of the Daylu Dena Council and land guardians program, had been evacuated.

“Accordingly, our local governments and land guardians, who play a vital role in overseeing hunting activities in our territory, have been unable to carry out our regular monitoring activities,” the letter said.

“Such monitoring activities are a vital element to our exercise of jurisdiction and authority over resources uses, including hunting activities, in our traditional territory,” the letter pointed out.

Those monitoring activities include keeping an eye on morel mushroom pickers, who invade the land by the hundreds the year after a wildfire when the prized fungi typically appear. Ball says the guardians hauled out truckloads of garbage from one abandoned camp, including mattresses and signs advertising makeshift restaurants.

The proposed Kaska protected area would stretch roughly from Fort Ware, the home of the Kwadacha First Nation, to Lower Post near the Yukon border. At 40,000 square kilometres — larger than Vancouver Island — it would encompass snow-tipped mountains, boreal forest, lakes and wetlands. Scientists say the area would provide a refugia for wildlife as the climate warms, with rivers like the Kechika, which begins in the Cassiar Mountains, providing climate adaptation corridors.

The massive roadless area — a rarity in the world — is still home to the full suite of wildlife that populated the area after the last Ice Age, including some of the country’s healthiest woodland caribou herds and many other at-risk species.

A new conservation economy would create jobs in ecotourism and other ventures, while extractive industries like mining and logging would take place on the perimeter.

Back on the Kechika River, Porter talks about some of the changes he’s seen on the land over the past decade: lower water levels in lakes and wetlands, less rain, fewer animals.

“You used to go up and down this river and see moose here, moose there,” he says. Now you’re lucky if you see moose.”

The protected area would reduce pressures on the landscape before moose populations dwindle further and caribou herds become locally extirpated like they have elsewhere in B.C., Porter notes.

Banner image: Kaska land guardians, travelling upstream on the Kechika River in a small motorboat, spot a forest fire and go to investigate. The fire was smouldering at a vacant hunting camp. Photo: Taylor Roades / The Narwhal