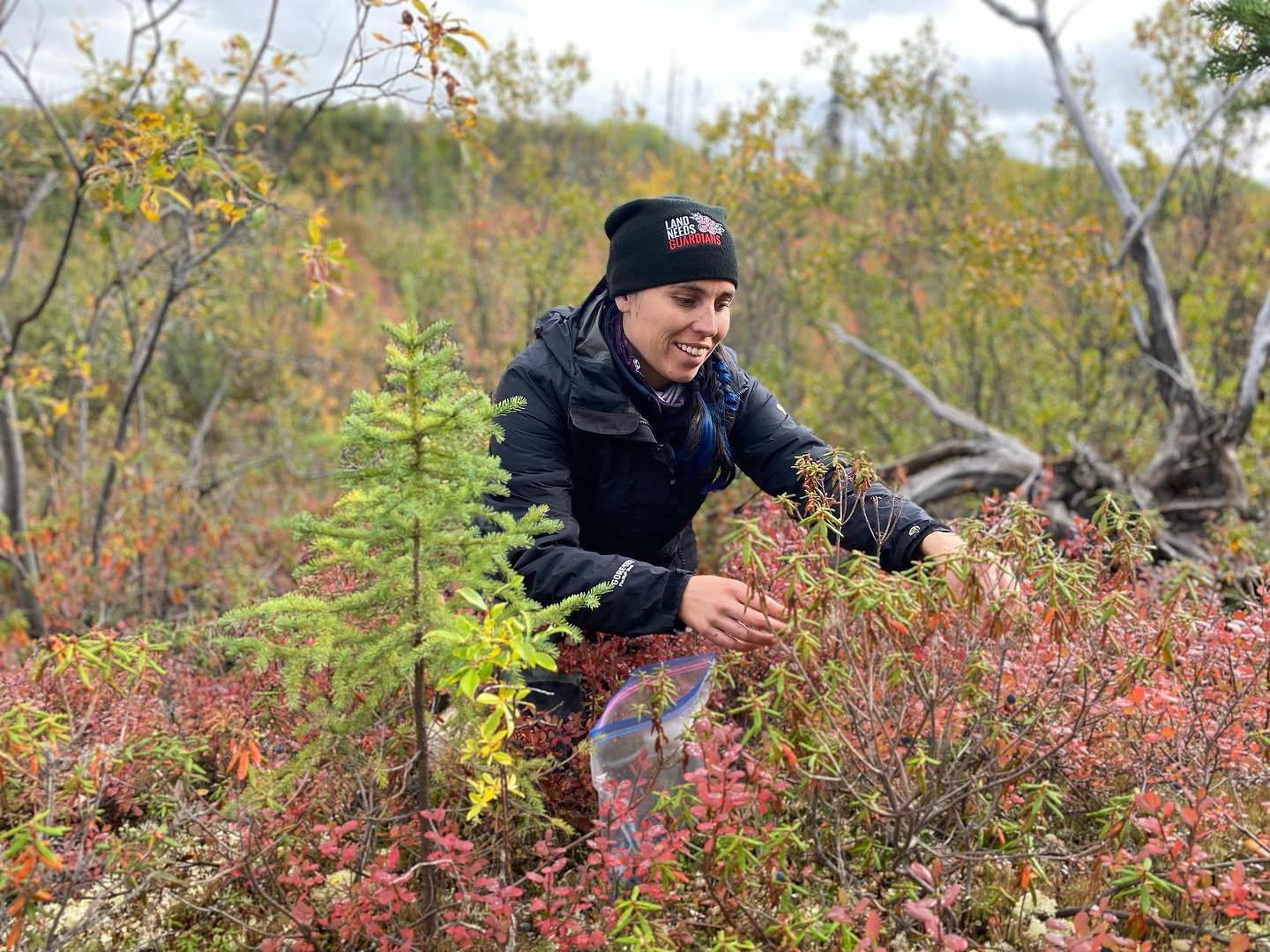 Gillian Staveley gathers dahbâ’ (blueberries) in Dena Kēyeh, the territory of the Kaska Dena people in what is now called British Columbia. Photo by Jeremy Staveley

“It’s something that’s really well known in our community,” Gillian Staveley, a director at the Dena Kayeh Institute in British Columbia, told Canada’s National Observer, “because people acknowledge that it is women who are taking care of the land and they always have been and they always will be.”

There are over 50 established or proposed Indigenous Protected and Conserved Areas (IPCAs) in the country — lands and waters where Indigenous governments have the primary role in protecting and conserving ecosystems through Indigenous laws, governance and knowledge systems. Indigenous women lead two-thirds of the 23 proposed IPCAs put forth in collaboration with the Indigenous Leadership Initiative.

“It’s easy to see why so many Indigenous women are active in those causes,” said Staveley, who works on land stewardship initiatives with the Dena Kayeh Institute in northern B.C.

“When I look at all of the land stewardship efforts that have happened in my community, they’ve always been by women. They’re the ones trailblazing it, they always have been and they probably always will be,” said Staveley.

“All Indigenous people — but particularly women — were raised to look at the land as if our children’s material and spiritual lives depended on it.”

She says the Kaska lands teams and Guardians are mostly women, and that at one point, it was solely young women taking on this work.

“They are the members out on the land developing that ongoing relationship with her. They know how important it is to protect her and safeguard her for future generations,” said Staveley. “They are the ones actually monitoring our lands for climate change, to make sure that our land is healthy so that our people are healthy.”

Biodiversity and climate work has never been more important

A recent report by the United Nations Intergovernmental Panel on Climate Change (IPCC) — referred to as “an atlas of human suffering” — spelled out the dire, “unavoidable” consequences of climate change, such as increased wildfire and flooding risks and growing food insecurity.

These impacts on the land are felt deeply by many Indigenous people, said Staveley. She recounted hearing stories of her grandmother and great-grandmother feeling when something was wrong with the land and says it’s that feeling of deep connection “that gives us the power to change the outcome.”

“We know that we can still work on restoring our connection back to these lands … we’re not giving up our hope on that because we know it’s for our survival and we have to do it; we have to be as resilient as our land,” said Staveley. “If we don’t have that ongoing positive and loving relationship with the land, our people are going to continue their hurting, they’re not going to be able to grow into the strong nation that I know them to be.”

This is the resolve Staveley and other Indigenous women bring to the table in the fight for a livable planet.

As a Kaska Dena woman, Staveley said she feels an ethical responsibility to do this work. 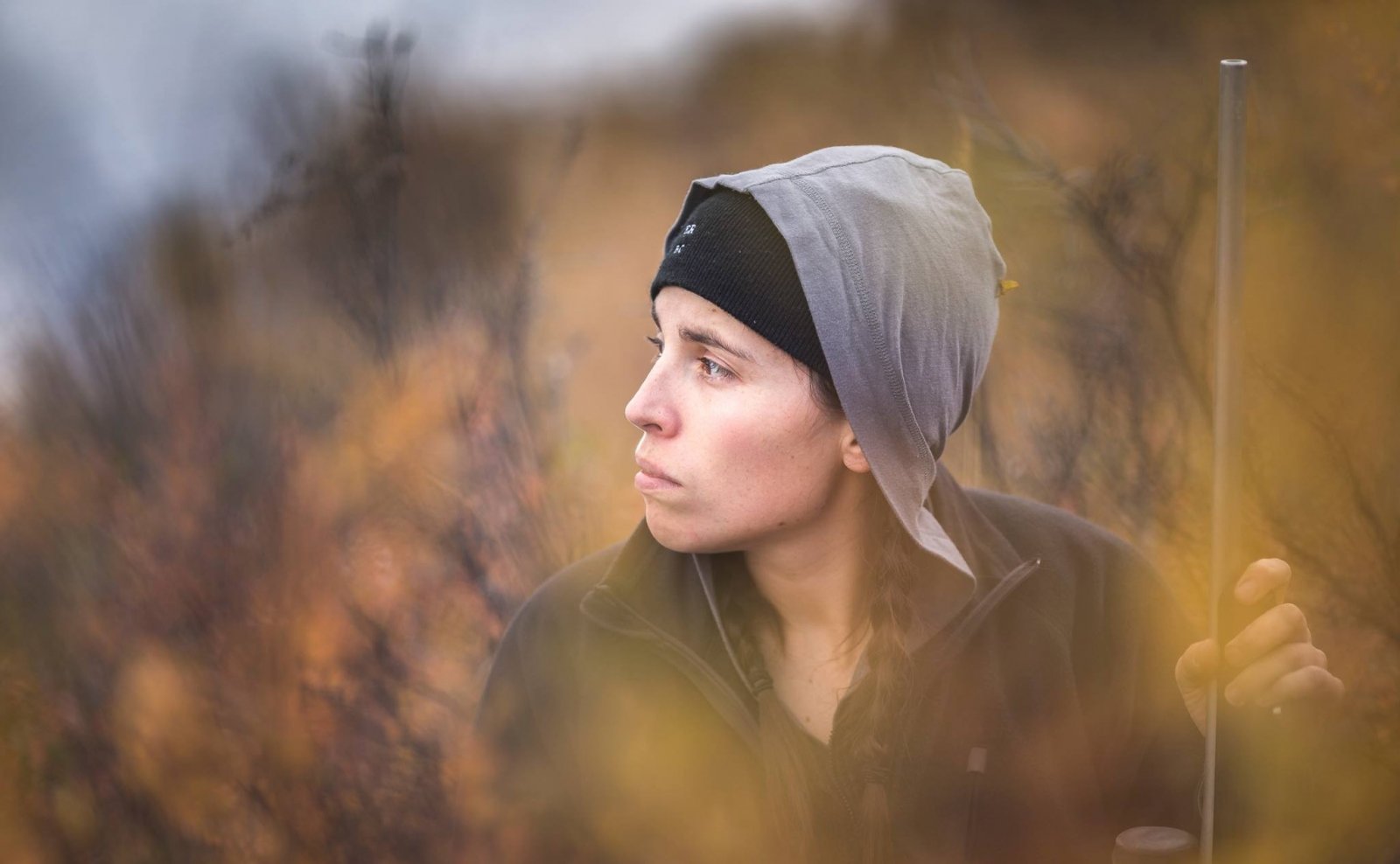 Gillian Staveley is a director at the Dena Kayeh Institute, a non-profit agency pushing for approximately 40,000-square-kilometres of land in the ancestral territory of the Kaska Dena to be designated an Indigenous Protected and Conserved Area. Photo by Jeremy Staveley

‘I look at her for my strengths’: The power of Indigenous matriarchs

Because Indigenous societies are matrilineal and have always valued women as life-givers, healers, leaders, wayfinders and survivors, these strong matriarchs raised women like Staveley to protect the land and the ways of life of their communities, said Staveley.

“They’re the ones making sure that we’re deeply rooted in understanding our ways of knowing, doing and being in this world,” she said.

“When you think about the amount of women who are part of that very beautiful web of beings who have lived in these places, they’ve come to know them intimately, they’ve adapted to them and they learn from them… It’s just that beautiful, sacred connection of all of our women ancestors that I think we feel today when we’re trying to protect the land,” said Staveley.

“I don’t know any Indigenous woman who doesn’t feel that strength; we are deeply connected to that strength of our matriarchs.”

Staveley’s grandmother was a strong and kind woman who grew up on Kaska Dena territory and gave birth multiple times by herself while working her trapline, said Staveley.

“I look at her for my strengths,” said Staveley, who keeps a photo of her grandmother in her wallet and on her phone as a constant reminder of the strength Kaska women have and continue to have in protecting the land.

“A lot of the women elders in my community always talk about how we are dismantling these processes of colonization that have made us feel so unsafe in our own lands by doing what we’re doing on the land and advocating for it,” she said. “When we’re doing that, we’re seeing a pretty transformational change within our communities because we’re inspiring others to do the same.”

People across the country can be part of this change by supporting IPCAs near them and learning about local lands and the people who call those lands home, said Staveley.

The recent IPCC report also emphasized that climate justice and supporting Indigenous self-determination, rights and knowledge based-adaptation are key to adapting to and reducing the inevitable risks of climate change.

At a traditional camp on Mushuau shipu — or the George River in Quebec — Valérie Courtois shows Indigenous youth how to prepare fish for smoking. Photo courtesy of Valérie Courtois

“My vision for what the future is going to look like is that every First Nation in Canada that wants a Guardian program should be able to have it … and that our peoples would be enabled to be the nations that they are, which is, they would be able to govern a landscape,” said Valérie Courtois, the Innu director of the Indigenous Leadership Initiative and a forester by training.

IPCAs are a step towards the ultimate goal of true Indigenous sovereignty, said Courtois. “This is, in some form … an interim land back action.”

In August, the federal government announced $340 million over five years for Indigenous Guardians initiatives and IPCAs, and is making IPCAs a key part of its commitment to protect 25 per cent of Canada’s land and oceans by 2025.

On March 7, Environment Minister Steven Guilbeault gave a speech at Kings College in London, Ont., ahead of International Women’s Day, acknowledging that “equal and meaningful participation of women in climate action is critical to deliver a global response that leaves no one behind.”

This “consistently puts us in this weird kind of paternal dynamic that isn’t appropriate for nations … you wouldn’t do that to other countries,” said Courtois. But, she noted, Guardian work does show a positive shift away from the program dynamic and towards partnership.

Despite the clear importance of Indigenous-led conservation, Courtois says government officials often tell her their constituents don’t ask about this when they go door to door.

“We need Canadians in every corner of this country to talk about the value of strong Indigenous nations. Because strong nations can make strong decisions on landscapes, and those are decisions that benefit everybody,” she said.

Courtois said the Innu people have survived on the land in what is now Newfoundland and Labrador and Quebec for over 10,000 years and can be trusted on how to best care for and manage it.

“Conservation and fulfilling our responsibilities is first and foremost about love,” said Courtois. “It’s about love for our lands (and) love for each other.”