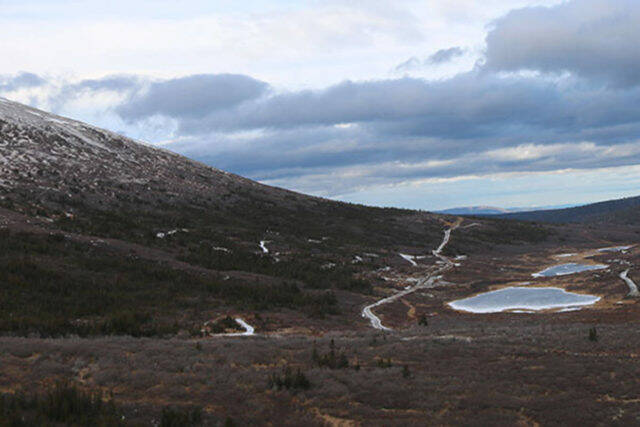 The Kudz Ze Kayah mine project, located in the centre of Finlayson caribou territory, was approved earlier this year. Affected First Nations are applying for a reversal of the decision in Yukon Supreme Court. (Courtesy/BMC Minerals)

A hearing date has been set for the Ross River Dena Council’s (RRDC) legal petition to reverse the government’s approval of the Kudz Ze Kayah project, a proposed mine to be located southeast of Ross River.

RRDC brings the petition, which was revised and resubmitted to the courts Oct. 6, on behalf of the rest of the Kaska Nation. The Yukon government, Attorney General of Canada and BMC Minerals are named as respondents.

The petition seeks an order quashing the decision document approving the mine that was issued through the Yukon Environment and Socio-economic Assessment Board (YESAB) in June and referring it back to the government decision bodies for further review. Natural Resources Canada, Fisheries and Oceans Canada and the Yukon government are listed as decision bodies on the document.

RRDC wants the decision quashed on the grounds that YESAB and government decision-makers failed to consult and accommodate the Kaska Nation and that the decision was procedurally unfair.

The Kudz Ze Kayah mine project at the centre of the court proceedings is set to be a copper, lead and zinc mine with open pit and underground portions.

Also being sought is an order compelling the decision bodies to “complete meaningful and deep consultation with Kaska regarding the project, give full consideration to a letter they received from Kaska representatives hours before the decision was issued and work with the Kaska to apply their Indigenous assessment process to the project.”

The Kaska also want it ordered that the court will retain jurisdiction to resolve disputes during the consultation process and that a new decision document cannot be issued until the other orders are in place.

In the decision document made public in June, the government decision bodies said the project should be allowed to proceed without further review, but also varied the recommendation allowing the project to proceed only under conditions meant to mitigate the adverse effects it will have on the Finlayson caribou herd among other considerations.

Ross River Dena Council’s petition details how they raised concerns both before and after the YESAB executive committee’s initial recommendation. Concerns include the Kaska lacking the necessary time and funding to participate in the consultation process and the project’s destruction or fragmentation of wildlife habitat including that of the Finlayson caribou herd. Worries were also voiced about the degradation of the area’s heritage values that include a caribou fence traditionally used in hunts and Kaska burial grounds.

The petition also notes that the proposed mine is in proximity to other mine projects that have been abandoned when they became financially unviable.

The letter flagged in the petition comments on the “ongoing consultation and accommodation failures by the decision bodies on the project,” as well as technical information, according to the RRDC. The petition states the decision bodies issued their decision less than a day after receiving the letter from RRDC and the Liard First Nation, contrary to assurances they had made in an earlier meeting.

An Oct. 3 case management conference set the schedule at which the petition will be heard in Yukon Supreme Court going forward. A four-day hearing is scheduled for April 2023.