CBC Interview with Dave Porter Re: Tsilhqot’in Decision and the Kaska 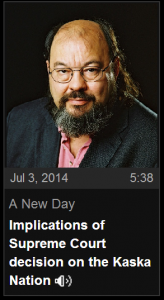 Implications of Supreme Court decision on the Kaska Nation

WHITEHORSE: (Sandi Coleman) It’s being called a historic decision. Last week the Supreme Court of Canada granted aboriginal title to the Tsilhqot’in First Nation for more than 1700 sq. k. of land in BC. It means companies and the government will require first nation consent for most development. First Nations across the country watching this very closely, that includes the Yukon. The Kaska Dena Council is once again calling on the federal government to negotiate its claims in southeast Yukon. The Kaska say a precedent has been set and conditions are right. Well Dave Porter, who is Chief Negotiator of the Kaska Dena Council, has joined us on the line.

Coleman: Mr. Porter, this is being called the decision of the century by you I understand. Why do you say that?

Porter: Well Calder broke the question open and the court at that time split on the question of recognition of title. This case clearly states that aboriginal title exists and it exists not only to specific locations on a map but to large parts of the traditional territory of First Nations who do not have a treaty and in the case of the Kaska theoretically what that means is that the entire southeast Yukon, all 50,000 sq. miles of it can be subject to aboriginal title.

Coleman: With that in mind what message should the Yukon and the federal governments be getting these days from the Kaska?

Porter: Yes, I think the Kaska are strategically well situation in that the Kaska have an 1870 court case that’s working its way through the courts and the Kaska along with White River are probably the only First Nations left in Canada that can rely on the 1870 order and as well the Kaska Dena Council have filed a suit in the Yukon with respect to the free entry process as it affects the Kaska Dena rights so the Kaska are already in the courts and thereby are poised to put the question of title on the line. So in my view it sets up a situation where one would think that the federal and Yukon governments would be amenable to go to a negotiating table as opposed to allowing the courts and the litigation to proceed and then run the risk of having a decision that they have no ability to influence.

Coleman: How optimistic are you that they’re going to see it in that light?

Porter: Well I think they have to. I mean there is no way out of this one. You can’t simply sit back and hope that things are going to change. There is no going back. Aboriginal title is alive and well in Canada and the duty and responsibility as dictated by the royal proclamation of 1763 and reinforced by the 1870 in the context of the Yukon you have to negotiate and acquire the lands that you may want to use for development purposes, for example, by way of a treaty with the affected First Nation. So the time for negotiation with respect to the Kaska is now.

Coleman: And do you get the feeling of this having been a step of empowerment for the Kaska?

Porter: Yes, I think it’s a positive decision for all aboriginal people in Canada. More importantly it is a point of extreme leverage for those that do not have a treaty and that’s a very small part of Canada now. As you know historic treaties have been negotiated, modern treaties have been entered into and so for those that do not have a treaty this is a tremendous decision. It also I think reinforces the need for consultation, accommodation to all aboriginal people in Canada where there is proposed land alienations and developments and so I think that the question of sharing is one I think that will be embraced by the Kaska leadership. I don’t think the Kaska leadership would pursue exclusivity for all the lands in southeast Yukon. I think that the Kaska leadership are in a position, have been in a position to negotiate. Remember with the McDonald government there was a negotiated agreement which respected devolution and the quid pro quo for that agreement was that the Kaska would have consent on the issuance of any permits for oil and gas development. The Yukon government reneged, repealed the legislation, removed that consent and then further with the Fentie government there was a bilateral agreement in which the Fentie government recognized that the Kaska had aboriginal rights and title to southeast Yukon but never acted on it and as a matter of fact repealed the forestry agreement that was negotiated which called for 50 percent management by the Kaska of all forest resources in southeast Yukon so I think all of those previous admittances by Yukon governments which were subsequently reneged on will be back on the table for reaffirmation.

Coleman: Mr. Porter, thank you so much for your time this morning.