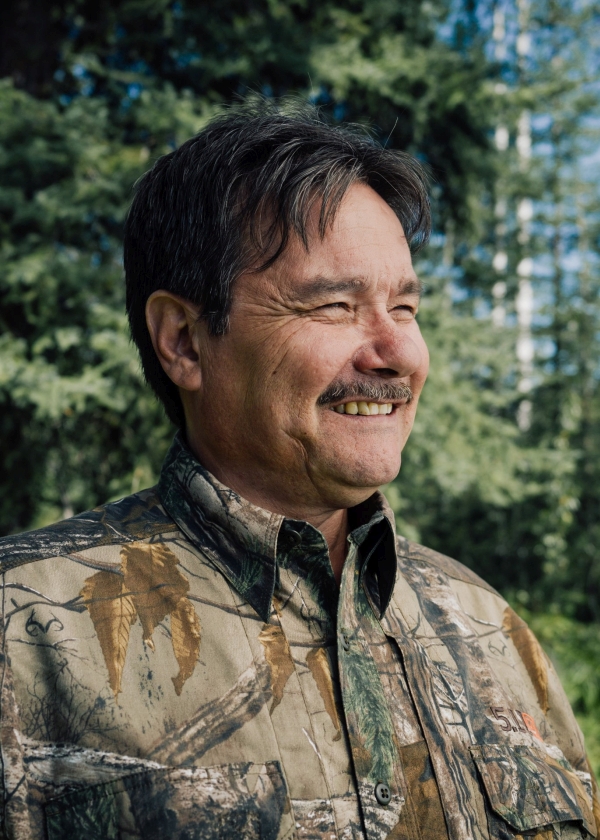 Hello, my name is Donald Van Somer. I was raised in Fort Ware.

I grew up here and went to school to the grade that was taught which was grade seven at the time and then proceeded to take correspondence up to grade nine, then took a couple years to just to do some work here, then decided to go back to school went out to the College of New Caledonia for two years of upgrading and achieved grade eleven. Then went to work back home here in Fort Ware doing various things, such as freighting up the river, fighting fires, helping the bros build houses, etc.

Then came the years of logging in the area which the Kwadacha Nation and Tseh Keh dene formed a company along with the two mills out of Mackenzie, the company was call Tsay Tay Forestry. I went to work training in the logging industry through this company and eventually became a director, and then the Kwadacha Nation formed a company called AGF and I worked for the Nation for many years logging.

After that, the Forest Service was looking for a Unit Crew Leader for our fire fighting crew to fight fires throughout the province which I took a turn at for five years. It was great to work with the Fort Ware crew as we were named one of the best in the Province because of the great crew that trained me as well.
I then wanted to go back to work for the Nation and went to work for the school as maintenance man up until I was asked to run for Chief which I have been in this position for the past twelve years now.

I would like to say that I was mentored by probably the best persons that were previous Chiefs here, Emil McCook, Chief of the community for 38 years, and Charlie Boya, who did a term for the community, they both taught me lots. Thank You both.

Another is the Dune Tyee Elders society that is successful, I was concerned that we were losing the voice of our elders, so I hired Susan McCook to co-ordinate and form the society, which is working very well, this is where I go to get advice and listen to the wisdom, the elders give me a lot of direction.

I also want to mention that I have sat on the Kwadacha Education Society for at least 25 years now and been part of our education systems successful growth throughout the years.

I would like to mention some of the successful achievements I have accomplished over the terms of my position, I will try mention all but may forget some.
One I`m very happy and proud of is the Khutsedzi K`e` Justice program which Rob Derkson and myself put in place and has been successful for ten years now and funded through the government.

Some of the major projects I’ve been successful in negotiating with the governments for is the new Administration and Health center and, we are in the process of getting a new Water tower and wells for cleaner and safer water for our community, I`ve also got in place the transfer station where we now haul our waste to PG rather than have the landfill. We also purchased a camp for outside people to stay at while in the community.

I’ve also negotiated a partnership with North Caribou Air so now we have our own scheduled flight into Fort Ware and along with this we are still working on the airstrip to bring in up to the Navigation Canada Standard.

I’ve also achieved an Energy Purchase agreement with BC hydro for our BIO-Mass plant which took seven years of negotiations, this allows our Bio-Mass plants to produce energy and heat for our community.

I’ve also been successful in reaching an IBA with Au Rico Gold who is now Centerra Gold for the Kemess area, this was done with Tseh Keh Dene and Takla First Nation, this negotiation took almost twelve years.

I’ve also been successful in negotiating a First Nations Community Forest Licence, this license is for 100,000 cubic meters a year, renewable every 15 years; this means in our traditional territory we are the licensee no one else can come into our territory this is ours and sustainable for ever.

The Strategic Engagement Agreement (SEA) was also negotiated with Kaska Dene to form a government to government process to also help manage our resources and keep others from coming and taking out of our Territory, they now must ask for permission.

Another achievement is the Guide Outfit acquisition at Turnagain Lodge.

The other projects that I am working on are the Emergency Response and Training Center, and a new Lagoon and lift station so we can get rid of the septic system in the future.

The two project I mentioned above, and the water system are happening this coming season.

I want to mention that some of the projects and Joint Venture took a long time and lots of travel involved and negotiations with Government and Industry.

So, as you can see I’ve accomplished a lot over the last twelve years, and will continue to work hard for the community, with the help of the council and many great employees.

I love to hunt and be active in all community events. Tsekene Awareness is one of my favourite times of year as I get to enjoy family time and get in a lot of hunting, since I travel so much. Always great to be out with the kids and having fun.